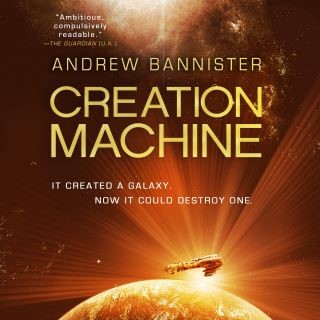 A Novel of the Spin

In the vast, artificial galaxy called the Spin, a rebellion has been crushed.

Viklun Hass is eliminating all remnants of the opposition. Starting with his daughter.

But Fleare Hass has had time to plan her next move from exile to the very frontiers of a new war.

For hundreds of millions of years, the planets and stars of the Spin have been the only testament to the god-like engineers that created them. Now, beneath the surface of a ruined planet, one of their machines has been found.

Andrew Bannister grew up in Cornwall. After initial feints towards music and engineering, he eventually studied Geology at Imperial College, London, and went to work in the North Sea oilfields before becoming an Environmental Consultant.

Andrew is an active volunteer, focusing on children with special educational needs. He is currently the Vice Chair of Special Olympics Leicestershire and Rutland.

He has always written and been a voracious reader. He has now discovered that writing science fiction, like his Spin Trilogy (Creation Machine, Iron Gods, Stone Clock) is at least as enjoyable as reading it, but takes longer.

Caitlin Davies is a New York City-based actor and audiobook narrator. Davies specializes in audiobooks for teens and young adults, including the House of Night series by P.C. Cast and Kristen Cast. She has performed in New York and regional theaters and is a member of the WorkShop Theater Company in New York City. She has a bachelor's degree from Vassar College, and has studied acting at the Eugene O'Neill National Institute, the British American Drama Academy, the Barrow Group, and Brown University/ Trinity Rep.