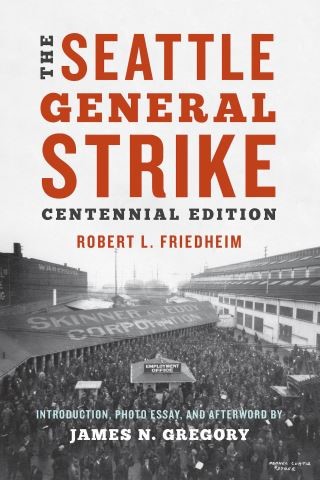 �We are undertaking the most tremendous move ever made by LABOR in this country, a move which will lead�NO ONE KNOWS WHERE!� With these words echoing throughout the city, on February 6, 1919, 65,000 Seattle workers began one of the most important general strikes in US history. For six tense yet nonviolent days, the Central Labor Council negotiated with federal and local authorities on behalf of the shipyard workers whose grievances initiated the citywide walkout. Meanwhile, strikers organized to provide essential services such as delivering supplies to hospitals and markets, as well as feeding thousands at union-run dining facilities.

Robert L. Friedheim�s classic account of the dramatic events of 1919, first published in 1964 and now enhanced with a new introduction, afterword, and photo essay by James N. Gregory, vividly details what happened and why. Overturning conventional understandings of the American Federation of Labor as a conservative labor organization devoted to pure and simple unionism, Friedheim shows the influence of socialists and the IWW in the city�s labor movement. While Seattle�s strike ended in disappointment, it led to massive strikes across the country that determined the direction of labor, capital, and government for decades. The Seattle General Strike is an exciting portrait of a Seattle long gone and of events that shaped the city�s reputation for left-leaning activism into the twenty-first century.