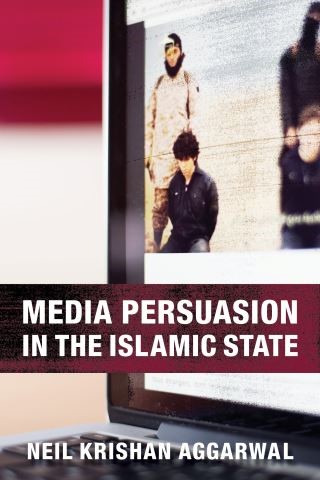 Media Persuasion in the Islamic State

Since the declaration of the War on Terror in 2001, militant groups such as al-Qaeda and the Islamic State have used the internet to disseminate their message and persuade people to commit violence. While many books have studied their operational strategies and battlefield tactics, Media Persuasion in the Islamic State is the first to analyze the culture and psychology of militant persuasion.

Drawing upon decades of research in cultural psychiatry, cultural psychology, and psychiatric anthropology, Neil Krishan Aggarwal investigates how the Islamic State has convinced people to engage in violence since its founding in 2003. Through analysis of hundreds of articles, speeches, videos, songs, and bureaucratic documents in English and Arabic, the book traces how the jihadist Abu Musab al-Zarqawi created a new culture and psychology, one that would pit Sunni Muslims against all others after the U.S.-led invasion of Iraq. Aggarwal tracks how Osama bin Laden and al-Zarqawi disagreed over the goal of militancy in jihad before reaching a détente in 2004 and how al-Qaeda in Iraq merged with five other groups to diffuse its militant cultural identity in 2006 before taking advantage of the Syrian civil war to emerge as the Islamic State. Aggarwal offers a definitive analysis of how culture is created, debated, and disseminated within militant organizations like the Islamic State. Psychiatrists, psychologists, and area-studies experts will find a comprehensive, systematic method for analyzing culture and psychology so they can partner with political scientists, policy makers, and counterterrorism experts in crafting counter-messaging strategies against militants.