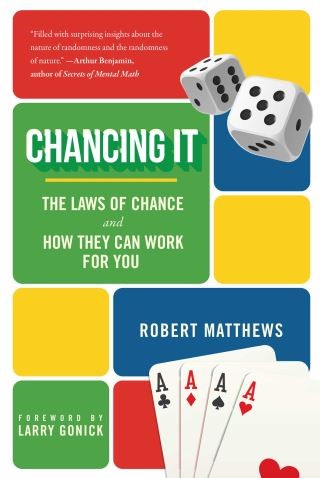 The Laws of Chance and How They Can Work for You

Make your own luck by understanding probability

Over the years, some very smart people have thought they understood the rules of chance?only to fail dismally. Whether you call it probability, risk, or uncertainty, the workings of chance often defy common sense. Fortunately, advances in math and science have revealed the laws of chance, and understanding those laws can help in your everyday life.

In Chancing It, award-winning scientist and writer Robert Matthews shows how to understand the laws of probability and use them to your advantage. He gives you access to some of the most potent intellectual tools ever developed and explains how to use them to guide your judgments and decisions. By the end of the book, you will know:


A groundbreaking introduction to the power of probability, Chancing It will sharpen your decision-making and maximize your luck.

Robert Matthews: Robert Matthews is one of Britain?s most experienced and successful science writers and broadcasters. He has won numerous awards for his writing, including the Association of British Science Writers? Feature Writer of the Year Award, and also won an Ig Nobel Prize for showing why toast tends to land butter-side down. He is currently a visiting professor at Aston University, where he specializes in probability and statistics. Matthews lives in Oxfordshire, England.
Larry Gonick is the author of The Cartoon Guide to Statistics and The Cartoon Guide to Calculus.