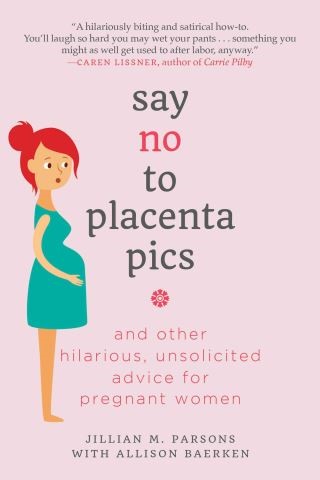 Say No to Placenta Pics

And Other Hilarious, Unsolicited Advice for Pregnant Women

Two Best Friends Make It through a Pregnancy, with All its Gut-Busting Hilarity and Gross Bits
Maternity isn’t all sunshine and rainbows and natural glows. It’s also elastic waistbands, hot flashes, and throbbing breasts! When Jillian Parsons’s best friend forever, Allison Baerken, finds herself knocked up, both women are thrown into a nine-month roller coaster ride of emotions—even though only one of them is pregnant.
Say No to Placenta Pics is the ultimate BFF’s uncensored, tell-all guide to the down and dirty of pregnancy for all badass moms-to-be (and their nonpregnant friends watching from the side lines) who desperately need a joke over the next nine months. Together, Allison and Jillian ride the learning curves from first trimester to after birth, rejecting standard pregnancy fluff in self-help books , exploring the issues about mother-to-be-hood no one else seems to have the guts to:

Witty, tongue-in-cheek, and fearlessly relatable, Say No to Placenta Pics is the realest girl talk between two women who deliver a satirical breakdown of modern-day maternity and what it means to be, and not to be, a Mom

Jillian M. Parsons: Jillian M. Parsons began cultivating her bizarre sense of humor in her teens with handwritten satirical erotica during school lunch hour. As a comedy writer, she was featured in Women in Comedy’s Independent Women series. She lives in Nova Scotia, Canada.Allison Baerken has a degree in journalism from Carleton University. She is a part-time English teacher and stay-at-home mom of two daughters. She lives in Medemblik, the Netherlands.