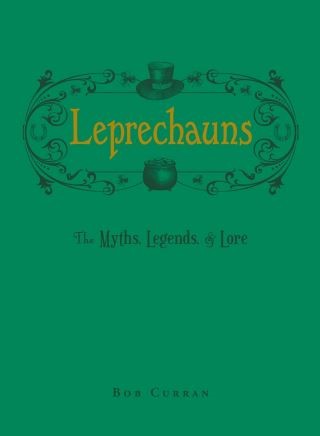 Explore the magic, mischief, and mystery behind Ireland’s most iconic and beloved mythical creature: the leprechaun.

Leprechauns have been at the heart of Irish culture for years, capturing our hearts and minds alike—but how much do we really know about the leprechaun, anyway? Often depicted as a little bearded man who partakes in mischief, no one knows if he is a fallen angel, diminished god, or son of fairies? What does he do all day? And what’s the story behind that hidden pot of gold?

In Leprechauns, prominent folklorist Bob Curran looks at the origins of this hero of Irish lore. He explores the superstitions surrounding the leprechaun and his enduring place in popular culture, and turns the spotlight on the “real” leprechaun—enigmatic, complex, and contradictory.

The perfect read for St. Patrick’s Day—or any time you wish to delve into the thrilling world of a timeless legend—Leprechauns is an essential addition to the collection of all lovers of myth and folklore.

Bob Curran: No one is sure where Bob Curran, PhD, comes from. Tradition says that one moment he wasn’t there and the next moment he was in County Down. He has, however, held various jobs— including gravedigger, hospital porter, civil servant, and teacher—has studied history and education at the New University of Ulster, and has received a PhD in Educational Social Psychology. Bob has a strong interest in local history and folklore, and has both written and lectured on these subjects; he is a frequent contributor to radio, and has appeared on television co-presenting programs on heritage and history. It is said that Bob currently lives somewhere in north Antrim, with his teacher wife and two small children; but it is difficult to be sure, as he is seen only “between the lights” (at twilight), and then only by a fortunate few.