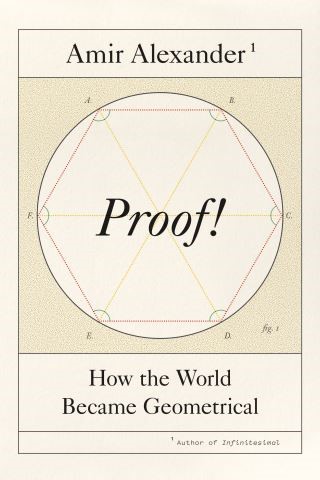 How the World Became Geometrical

On a cloudy day in 1413, a balding young man stood at the entrance to the Cathedral of Florence, facing the ancient Baptistery across the piazza. As puzzled passers-by looked on, he raised a small painting to his face, then held a mirror in front of the painting. Few at the time understood what he was up to; even he barely had an inkling of what was at stake. But on that day, the master craftsman and engineer Filippo Brunelleschi would prove that the world and everything within it was governed by the ancient science of geometry.

In Proof!, the award-winning historian Amir Alexander traces the path of the geometrical vision of the world as it coursed its way from the Renaissance to the present, shaping our societies, our politics, and our ideals. Geometry came to stand for a fixed and unchallengeable universal order, and kings, empire-builders, and even republican revolutionaries would rush to cast their rule as the apex of the geometrical universe. For who could doubt the right of a ruler or the legitimacy of a government that drew its power from the immutable principles of Euclidean geometry?

From the elegant terraces of Versailles to the broad avenues of Washington, DC and on to the boulevards of New Delhi and Manila, the geometrical vision was carved into the landscape of modernity. Euclid, Alexander shows, made the world as we know it possible.

Amir Alexander: Amir Alexander teaches history at the University of California, Los Angeles. He is the author of Infinitesimal, Geometrical Landscapes, and Duel at Dawn. His writing has appeared in The New York Times and the Los Angeles Times, and his work has been featured in Nature and The Guardian, on NPR, and elsewhere. He lives in Los Angeles, California.