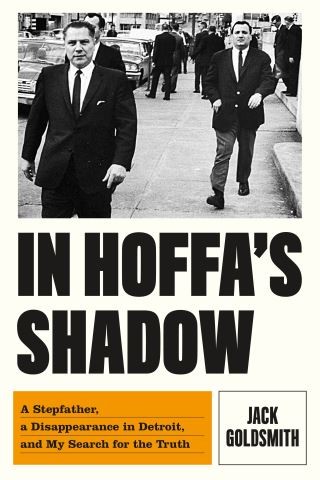 A Stepfather, a Disappearance in Detroit, and My Search for the Truth

"The Irishman is great art . . . but it is not, as we know, great history . . . Frank Sheeran . . . surely didn’t kill Hoffa . . . But who pulled the trigger? . . . For some of the real story, and for a great American tale in itself, you want to go to Jack Goldsmith’s book, In Hoffa’s Shadow.” —Peggy Noonan, The Wall Street Journal

"In Hoffa’s Shadow is compulsively readable, deeply affecting, and truly groundbreaking in its re-examination of the Hoffa case . . . a monumental achievement." —James Rosen, The Wall Street Journal

As a young man, Jack Goldsmith revered his stepfather, longtime Jimmy Hoffa associate Chuckie O’Brien. But as he grew older and pursued a career in law and government, he came to doubt and distance himself from the man long suspected by the FBI of perpetrating Hoffa’s disappearance on behalf of the mob. It was only years later, when Goldsmith was serving as assistant attorney general in the George W. Bush administration and questioning its misuse of surveillance and other powers, that he began to reconsider his stepfather, and to understand Hoffa’s true legacy.

In Hoffa’s Shadow tells the moving story of how Goldsmith reunited with the stepfather he’d disowned and then set out to unravel one of the twentieth century’s most persistent mysteries and Chuckie’s role in it. Along the way, Goldsmith explores Hoffa’s rise and fall and why the golden age of blue-collar America came to an end, while also casting new light on the century-old surveillance state, the architects of Hoffa’s disappearance, and the heartrending complexities of love and loyalty.

Jack Goldsmith: Jack Goldsmith is the Henry L. Shattuck Professor of Law at Harvard University. From October 2003 to June 2004 he was assistant attorney general, Office of Legal Counsel. He lives in Newton, Massachusetts.