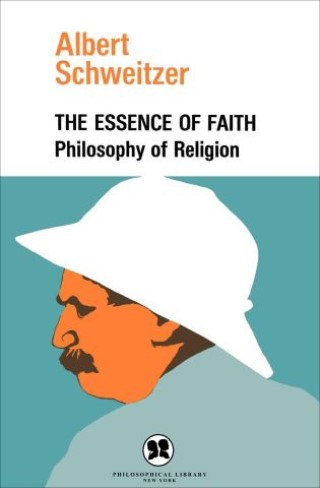 The Essence of Faith

The Nobel Peace Prize–winning doctor, theologian, and missionary explores the essence of faith in this masterful early work on Kantian metaphysics.

Famous for his medical missionary work in what is now the West African country of Gabon, Albert Schweitzer was an accomplished theologian, philosopher, and international bestselling author. While studying for his PhD at the Sorbonne, Schweitzer developed his views on theology through an analysis of Immanuel Kant’s philosophy of religion.

In The Essence of Faith, Schweitzer explores Kantian ideas to arrive at an inspiring meditation on God, faith, and the limits of human understanding. Both an accessible introduction to Schweitzer’s theology and a strikingly original approach to Kant’s writing and thought, The Essence of Faith is a slim volume of profound ideas.

Albert Schweitzer:
Albert Schweitzer, OM (14 January 1875 – 4 September 1965) was a German—and later French—theologian, organist, philosopher, physician, and medical missionary in Africa, also known for his interpretive life of Jesus. He was born in the province of Alsace-Lorraine, at that time part of the German Empire. He considered himself French and wrote in French. Schweitzer, a Lutheran, challenged both the secular view of Jesus as depicted by historical-critical methodology current at his time in certain academic circles, as well as the traditional Christian view.

He received the 1952 Nobel Peace Prize for his philosophy of “Reverence for Life”, expressed in many ways, but most famously in founding and sustaining the Albert Schweitzer Hospital in Lambaréné, now in Gabon, west central Africa (then French Equatorial Africa). As a music scholar and organist, he studied the music of German composer Johann Sebastian Bach and influenced the Organ reform movement (Orgelbewegung).