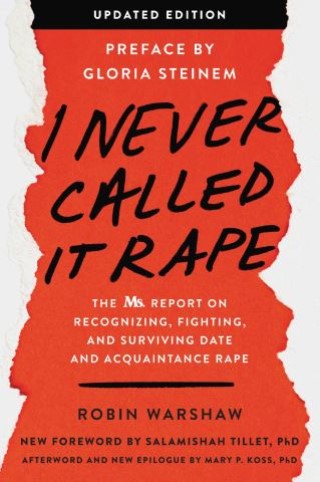 The Ms. Report on Recognizing, Fighting, and Surviving Date and Acquaintance Rape

A new edition of the 1988 classic text that exposed the extreme prevalence of rape in America, coining the term acquaintance rape and establishing the disturbing statistics on sexual assault that still hold just as true today—now featuring an original preface from Gloria Steinem, a new introduction by Salamishah Tillet, an updated afterword by Mary P. Koss, PH.D., as well as an updated resources section.

“Essential. . . . It is nonpolemical, lucid, and speaks eloquently not only to the victims of acquaintance rape but to all those caught in its net.”— Philadelphia Inquirer

In 1988, Robin Warshaw wrote I Never Called It Rape, the ground-breaking book that revealed a staggering truth: 25% of women were the victims of rape or attempted rape. Over 80% of these women knew their assailants.

Warhsaw based her reportage on the first large-scale study into rape ever, conducted by Ms. Magazine in the late 80s. Thirty years later, we now have a wealth of statistics on rape. The disturbing truth is that the figures have not diminished. That our culture enables rape is not just shown by the numbers—the outbreak of allegations against serial rapists from Bill Cosby to Harvey Weinstein and the 2016 presidential election of Donald Trump, a man who was recorded bragging about sexual assault, have further amplified this horrifying truth.

With over 80,000 copies sold to date, I Never Called It Rape has served as a guide to understanding rape as a cultural phenomenon for tens of thousands—providing women and men with strategies to address our rape endemic; survivors with the context and resources to help them heal from their experiences; and pulling the wool from all our eyes on the pervasiveness of rape and sexual assault today.

As relevant today as when it was first published, this new edition features Warshaw’s original report and her 1994 Introduction, as well as an original Preface from Gloria Steinem, a new Introduction by Salamishah Tillet on how the cultural landscape has evolved since the 1980s, an updated Afterword by Mary P. Koss, PH.D., examining the ways she would approach the research she did for Ms. differently today, as well as an updated resources section.