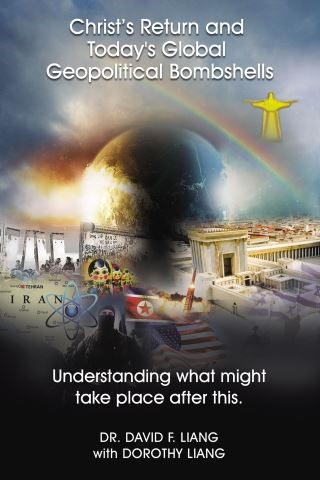 Many people are eager to embrace Nostradamus and the Mayans while dismissing the Holy Bible’s prophecies. Yet the Bible (in Revelation chapter 4) promises: “Come up here, and I will show you what must take place after this.” Inspired by that promise, this principal author has gleaned decades of insight regarding global geopolitical events and what might take place toward the end of this world as we know it. In 1989 he predicted in a Chinese magazine, the possibility of German unification as an expression of the mixed iron-and-clay kingdom foreseen in Daniel chapter 2. The same prophecy suggests the intermingling of China with Taiwan, and North and South Korea. Back in 1989, this principal author also predicted that the U.S. would withdraw from Europe because the Bible speaks little of the U.S.’s role during Earth’s final hour.

Chapter 1 of this book deals with doomsday (end of the world) bombshells with reference to notable scientists such as Stephen Hawking, Martin Rees, Frank Fenne, and Isaac Newton. Chapters 2 and 3 address the startling role reversal between the U.S., a former superpower now in retreat from the global scene, and a resurgent Russia — and the incredible role played by Vladimir Putin in both Russia and the U.S. Chapter 4 deals with the miraculous rebirth of Israel and the path toward a rebuilt Third Temple. Chapter 5 deals with Middle East bombshells, particularly the rise of radical Islamic-based entities and the Bible’s portrait of Babylon. Chapter 6 applies the aforementioned iron-and-clay-mixture analogy to the possible unification of China with Taiwan, and North and South Korea — including bombshell overtures between U.S. President Trump and North Korean leader Kim. Chapter 7 deals with China‘s ascent and applies a prophecy in Isaiah chapter 49 to the increasing number of Chinese Christians despite communism. Chapter 8 situates Brexit (‘Britain exiting the European Union,’ which this principal author foresaw) within the Biblical context of a future ten-kings coalition and the emergence of the antichrist. Finally, chapter 9 deals with Christ’s own statements of what geopolitical bombshells must take place leading up to his return to Earth. The Bible’s accuracy in predicting geopolitical events gives us reason to believe in its supernatural authority, and thus to believe its ultimate promise — that Jesus Christ will return to this world.

Dr. David Liang was formerly responsible for space-related R&D in Canada’s Dept. of National Defence including ballistic missile defence. An international speaker on Bible prophecy and personal evangelism, he has written four books in Chinese. This is his first English book.

Dorothy (Dr. Liang’s daughter) has a law degree from the U of Toronto. She served as a lawyer and officer in the Canadian Armed Forces, currently works in the Senate of Canada, and hopes to join church-planting work.