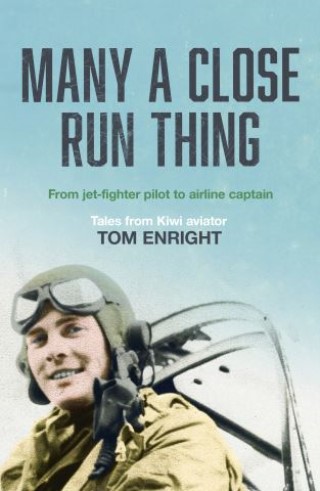 Many a Close Run Thing

A New Zealand squadron leader, flying-boat captain and airliner pilot on a life of aerial adventure Planes were rarely seen above the small Central Otago sheep-farming town of Ranfurly in the 1940s. Yet as a young boy, Tom Enright had a fascination with the skies that quickly developed into a longing to become a pilot. He joined the RNZAF as an engineer in 1951, and was sent to England at just 16 to attend the revered Royal Air Force college in Cranwell.

Returning to New Zealand to join the Vampire fighter squadron in Ohakea, Tom became a famed member of the RNZAF aerobatic team. Later he became a flying commander at Wigram air base, before captaining a Sunderland flying boat to isolated communities in the vast South Pacific, often to the upper limits of the plane's endurance.

From the near-catastrophic opening of Wellington airport to flying Boeing 747s into the world's biggest airports, this is Tom Enright's story of the mishaps, misadventures and high-altitude drama of a 45-year flying career.

Tom Enright is a veteran New Zealand pilot from Central Otago. He joined the Air Training Corps of the Royal New Zealand Air Force when he was in secondary school, and on graduation was recommended for a cadetship with the Royal Air Force College at Cranwell, England. His first 20 years flying was in a variety of military aircraft, mainly in New Zealand and the Pacific theatre. He then spent the next 25 years as an airline pilot.