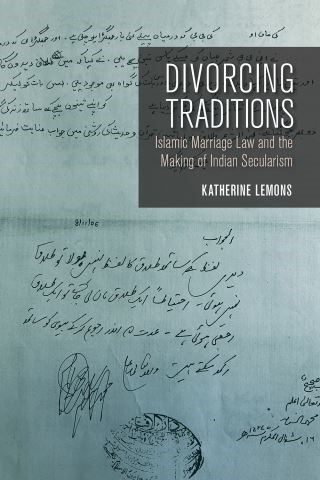 Islamic Marriage Law and the Making of Indian Secularism

Divorcing Traditions is an ethnography of Islamic legal expertise and practices in India, a secular state in which Muslims are a significant minority and where Islamic judgments are not legally binding. Katherine Lemons argues that an analysis of divorce in accordance with Islamic strictures is critical to the understanding of Indian secularism.

Lemons analyzes four marital dispute adjudication forums run by Muslim jurists or lay Muslims to show that religious law does not muddle the categories of religion and law but generates them. Drawing on ethnographic and archival research conducted in these four institutions—NGO-run women's arbitration centers (mahila panchayats); sharia courts (dar ul-qazas); a Muslim jurist's authoritative legal opinions (fatwas); and the practice of what a Muslim legal expert (mufti) calls "spiritual healing"—Divorcing Traditions shows how secularism is an ongoing project that seeks to establish and maintain an appropriate relationship between religion and politics. A secular state is always secularizing. And yet, as Lemons demonstrates, the state is not the only arbiter of the relationship between religion and law: religious legal forums help to constitute the categories of private and public, religious and secular upon which secularism relies. In the end, because Muslim legal expertise and practice are central to the Indian legal system and because Muslim divorce's contested legal status marks a crisis of the secular distinction between religion and law, Muslim divorce, argues Lemons, is a key site for understanding Indian secularism.