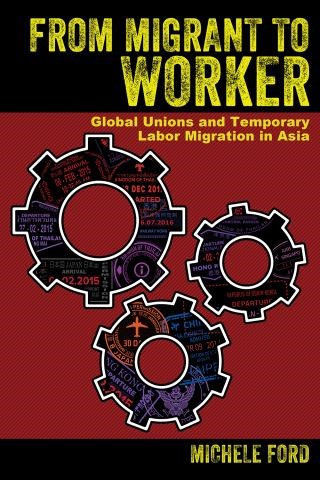 From Migrant to Worker

What happens when local unions begin to advocate for the rights of temporary migrant workers, asks Michele Ford in her sweeping study of seven Asian countries? Until recently unions in Hong Kong, Japan, Malaysia, Singapore, South Korea, Taiwan, and Thailand were uniformly hostile towards foreign workers, but Ford deftly shows how times and attitudes have begun to change. Now, she argues, NGOs and the Global Union Federations are encouraging local unions to represent and advocate for these peripheral workers, and in some cases succeeding.

From Migrant to Worker builds our understanding of the role the international labor movement and local unions have had in developing a movement for migrant workers' labor rights. Ford examines the relationship between different kinds of labor movement actors and the constraints imposed on those actors by resource flows, contingency, and local context. Her conclusions show that in countries—Hong Kong, Malaysia, and Thailand—where resource flows and local factors give the Global Union Federations more influence local unions have become much more engaged with migrant workers. But in countries—Japan and Taiwan, for example—where they have little effect there has been little progress. While much has changed, Ford forces us to see that labor migration in Asia is still fraught with complications and hardships, and that local unions are not always able or willing to act.