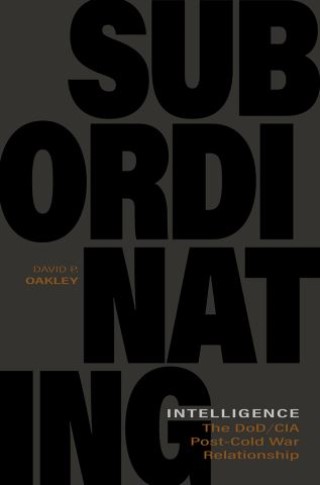 Since September 11, 2001, the CIA and DoD have operated together in Afghanistan, Iraq, and during counterterrorism operations. Although the global war on terrorism gave the CIA and DoD a common purpose, it was actions taken in the late eighties and early nineties that set the foundation for their current relationship. Driven by the post--Cold War environment and lessons learned during military operations, policy makers made intelligence support to the military the Intelligence Community's top priority. In response to this demand, the CIA/DoD instituted policy and organizational changes that altered the CIA/DoD relationship. While debates over the future of the Intelligence Community were occurring on Capitol Hill, the CIA and DoD were expanding their relationship in peacekeeping and nation-building operations in Somalia and the Balkans.

By the late 1990s, some policy makers and national security professionals became concerned that intelligence support to military operations had gone too far, weakening the long-term analysis required for strategy and policy development. In Subordinating Intelligence: The DoD/CIA Post--Cold War Relationship, David P. Oakley reveals that, despite these concerns, no major changes to either national intelligence organization or its priorities were implemented. These concerns were forgotten after 9/11, as the United States fought two wars and policy makers increasingly focused on tactical and operational actions. As policy makers became fixated with terrorism and the United States fought in Iraq and Afghanistan, the CIA directed a significant amount of its resources toward global counterterrorism efforts and in support of military operations.