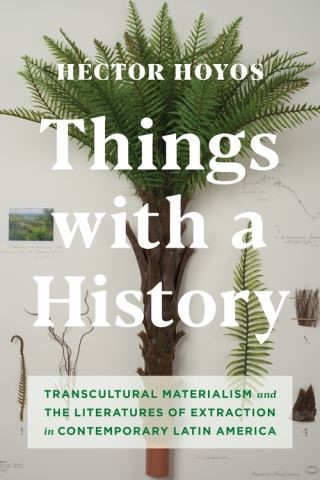 Things with a History

Transcultural Materialism and the Literatures of Extraction in Contemporary Latin America

Can rubber trees, silicone dolls, corpses, soil, subatomic particles, designer shoes, and discarded computers become the protagonists of contemporary literature—and what does this tell us about the relationship between humans and objects? In Things with a History, Héctor Hoyos argues that the roles of objects in recent Latin American fiction offer a way to integrate materialisms old and new, transforming our understanding of how things shape social and political relations.

Discussing contemporary authors including Roberto Bolaño, Ariel Magnus, César Aira, and Blanca Wiethüchter as well as classic writers such as Fernando Ortiz and José Eustasio Rivera, Hoyos considers how Latin American literature has cast things as repositories of history, with an emphasis on the radically transformed circulation of artifacts under globalization. He traces a tradition of thought, transcultural materialism, that draws from the capacity of literary language to defamiliarize our place within the tangible world. Hoyos contrasts new materialisms with historical-materialist approaches, exposing how recent tendencies sometimes sidestep concepts such as primitive accumulation, commodity fetishism, and conspicuous consumption, which have been central to Latin American history and literature. He contends that an integrative approach informed by both historical and new materialisms can balance seeing things as a means to reveal the true nature of social relations with appraisals of things in their autonomy. Things with a History simultaneously offers a sweeping account of the material turn in recent Latin American culture and reinvigorates social theory and cultural critique.