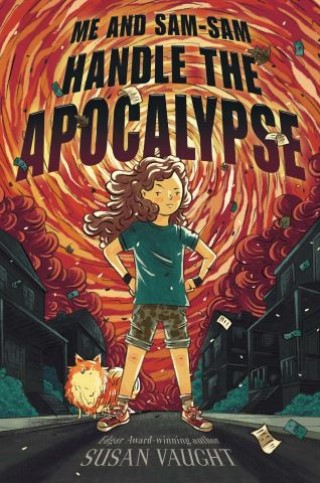 Me and Sam-Sam Handle the Apocalypse

“Edgar-winning Vaught, a neuropsychologist, has both personal and professional experience to draw on in crafting a narrator who is admirably smart and resilient despite an ‘itchy’ brain and a compulsion to count things.” —Booklist (starred review)

Jesse is on the case when money goes missing from the library and her dad is looking like the #1 suspect in Edgar Award­–winning author Susan Vaught’s latest middle grade mystery.

I could see the big inside of my Sam-Sam. I had been training him for 252 days with mini tennis balls and pieces of bacon, just to prove to Dad and Mom and Aunt Gus and the whole world that a tiny, fluffy dog could do big things if he wanted to. I think my little dog always knew he could be a hero.

I just wonder if he knew about me.

When the cops show up at Jesse’s house and arrest her dad, she figures out in a hurry that he’s the #1 suspect in the missing library fund money case. With the help of her (first and only) friend Springer, she rounds up suspects (leading to a nasty confrontation with three notorious school bullies) and asks a lot of questions. But she can’t shake the feeling that she isn’t exactly cut out for being a crime-solving hero. Jesse has a neuro-processing disorder, which means that she’s “on the spectrum or whatever.” As she explains it, “I get stuck on lots of stuff, like words and phrases and numbers and smells and pictures and song lines and what time stuff is supposed to happen.” But when a tornado strikes her small town, Jesse is given the opportunity to show what she's really made of—and help her dad.

Told with the true-as-life voice Susan Vaught is known for, this mystery will have you rooting for Jesse and her trusty Pomeranian, Sam-Sam.

Susan Vaught: Susan Vaught is the author of Edgar Award­–winning novel Footer Davis Probably Is Crazy. It was a Junior Library Guild Selection, and The Horn Book called it “compelling, offbeat, and fearless.” Things Too Huge to Fix by Saying Sorry received three starred reviews, and Super Max and the Mystery of Thornwood’s Revenge was called “an excellent addition to middle grade shelves” by School Library Journal. She works as a neuropsychologist at a state psychiatric facility, specializing in helping people with severe and persistent mental illness, intellectual disability, and traumatic brain injury. She lives on a farm with her wife and son in rural western Kentucky.