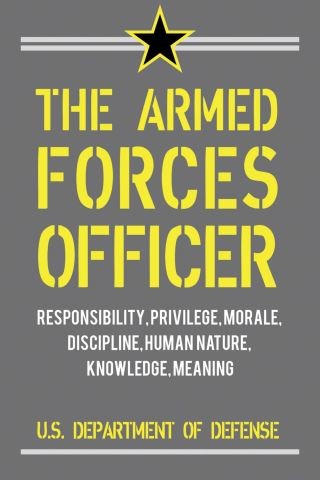 This newest edition of the classic guide for military officers is a necessity given the volatility of our current political climate.

The Armed Forces Officer is much more than a how-to guide for military officers. It is a series of candid, timeless essays on the nature of the people who occupy the ranks of the military services. This invaluable resource for all those involved in the military highlights that our military is not just a collection of machines, processes, and regulations, but a very human endeavor whose proper understanding requires acknowledging that humans are what make our military the complex, potent, and wonderful organization that it is—a truth that can be applied to any organization, military or civilian, composed of people and all their mysterious complexities.

This is an updated and rewritten edition of the 1950 classic, The Armed Forces Officer. This edition includes a foreword by General Joseph F. Dunford, Jr., the chairman of the Joint Chiefs of Staff.