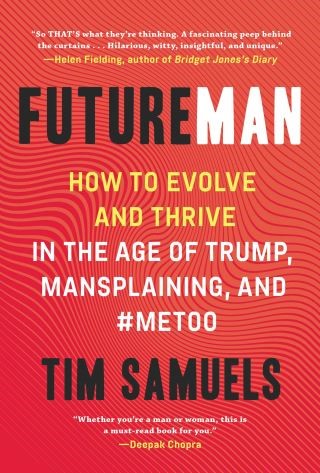 How to Evolve and Thrive in the Age of Trump, Mansplaining, and #MeToo

A sharply intelligent, explosively honest, and laugh-out-loud funny look at the state of masculinity and how to be a man, for fans of Jon Ronson and Matt Haig.
If ever there was an urgent need for a frank understanding of what's going on with men, it is now. Male rage and frustration have driven resurgent populism, mass shootings, and epidemics of addiction and violence. Powerful men who have abused their positions for decades have been and are being #MeToo–outed and dismissed. The patriarchy, that solid bedrock of male power for thousands of years, seems to be crumbling.

In Future Man, with his characteristic intelligence and humor, Tim Samuels assesses the state of contemporary manhood, its conflicts, confusions, and challenges. Trapped in bodies barely changed since cavemen days, men are contending with the stresses of corporate culture, lifelong commitment, rampant depression, and crazy expectations to be successful at work and at home. But how can you hunt and gather in an open-plan office? Why do men make up to 95 percent of Fortune 500 CEOs yet 93 percent of the prison population? Why do men commit suicide at more than three times the rate of women?

Tim Samuels: Tim Samuels is an award-winning documentary filmmaker, broadcaster, and journalist. He won three Royal Television Society awards and best documentary at the World Television Festival as well as the “Making a Difference” award at the Mind Media Awards for his work on mental health. He created the BBC Radio 5 call-in show Men’s Hour and has been a host for eight years. He recently became a correspondent for National Geographic Channel’s Explorer, based out of New York, and he contributes to such US publications as GQ, New York Times Magazine, and Huffington Post. He lives in London.