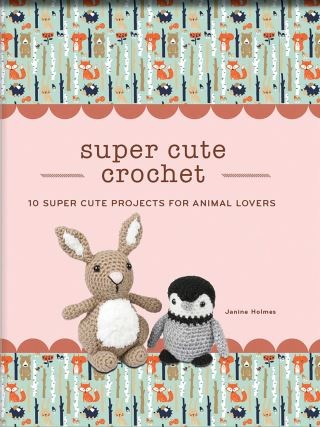 You’ll be hooked on these ten super cute crochet animals!

Super Cute Crochet contains photos and illustrations to guide you in making ten super cute projects: including a panda, penguin, koala, lamb, sloth, llama, unicorn, hedgehog, piglet, and bunny. If you squeal with delight over furry and fuzzy creatures, you’ll be hooked on making these animals.

Janine Holmes: Janine Holmes has loved anything to do with arts and crafts ever since she can remember. She received a degree in constructed textiles, learning the skills necessary to design and operate Jacquard looms and industrial-knitting machines, eventually pursuing a career in print design. Having a hankering to get back to her yarn-based roots, she later embarked on a journey to learn the techniques of crochet, particularly amigurumi. After studying a few how-to videos and poring over pattern books, she designed her first soft toys—a pair of lambs named Lulu and Lollo. It was love at first sight. In 2012, Janine set up her Etsy shop under the name of Moji-Moji Design and went on to create crocheted animals and dolls for numerous books and magazines. She lives in Worcester, England, with her husband, three sons, four cats, and umpteen tons of yarn.Meryl Henderson is a graduate of Syracuse University. In 1974, she graduated summa cum laude with a Bachelor of Fine Arts degree. For the past 44 years, she has been working as a freelance illustrator, specializing in artwork for children. She has illustrated more than a hundred books and has contributed illustrations to countless magazines and educational books. She currently lives in Catskill, New York.Chellie Carroll is a designer-turned-illustrator based in Derbyshire, England. She experiments with mixed media and, increasingly, rediscovering pens, pencils, and paint. Drawing on her experience in the fashion industry, she creates intricate patterns and striking compositions.