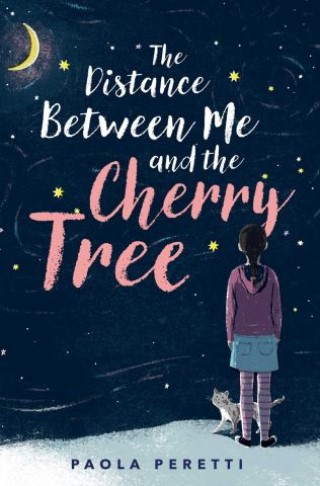 The Distance between Me and the Cherry Tree

Recipient of a Batchelder Honor

Ten-year-old Mafalda hides the fact that she is going blind from her family and friends in this lyrical, bittersweet debut novel from Italian author Paola Peretti that shows you how to overcome the darkness—even when you can’t see the light at the end of the tunnel.

There are a lot of things ten-year-old Mafalda cares a lot about. Like, counting the stars in the night sky, playing soccer, and climbing the cherry tree outside her school. Mafalda even goes so far as to keep a list of all these things, because soon she won’t be able to do them anymore—because she’s going blind.

Even with her bad eyesight Mafalda can see that people are already treating her differently—and that’s the last thing she wants. So, she hides the fact that her vision is deteriorating faster than anyone predicted, and she makes a plan: When the time is right, she’ll go live in the cherry tree, just like her favorite book character.

But as Mafalda loses her sight, surprising things come in to focus. With the help of her family and friends both old and new, Mafalda discovers the things that matter most.

Paola Peretti: Paola Peretti lives in the province of Verona, Italy. She studied literature, philosophy, and graduated with a degree in publishing and journalism in 2011, and later attended the Palomar School of creative writing in Rovigo. Fifteen years ago, she was diagnosed with a rare genetic illness called Stargardt disease—the same as her main character—which causes progressive vision loss and eventual blindness. She is currently teaching Italian to immigrant children. The Distance between Me and the Cherry Tree is her debut novel.