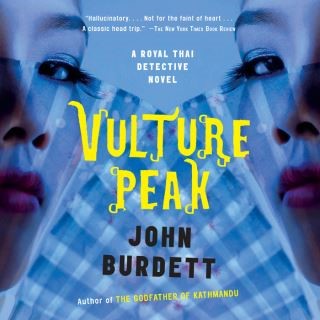 Nobody knows Bangkok like Royal Thai Police Detective Sonchai Jitpleecheep, and there is no one quite like Sonchai: a police officer who has kept his Buddhist soul intact—more or less—despite the fact that his job shoves him face-to-face with some of the most vile and outrageous crimes and criminals in Bangkok. But for his newest assignment, everything he knows about his city—and himself—will be a mere starting point.

He’s put in charge of the highest-profile criminal case in Thailand—an attempt to bring an end to trafficking in human organs. He sets in motion a massive sting operation and stays at its center, traveling to Phuket, Hong Kong, Dubai, Shanghai, and Monte Carlo. He draws in a host of unwitting players that includes an aging rock star wearing out his second liver and the mysterious, diabolical, albeit gorgeous co-queenpins of the international body-parts trade: the Chinese twins known as the Vultures. And yet, it’s closer to home that Sonchai will discover things getting really dicey: rumors will reach him suggesting that his ex-prostitute wife, Chanya, is having an affair. Will Sonchai be enlightened enough—forget Buddha, think jealous husband—to cope with his very own compromised and compromising world?

All will be revealed here, in John Burdett’s most mordantly funny, propulsive, fiendishly entertaining novel yet.