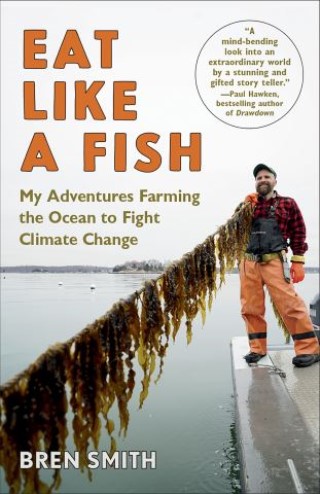 My Adventures as a Fisherman Turned Restorative Ocean Farmer

In the face of apocalyptic climate change, a former fisherman shares a bold and hopeful new vision for saving the planet: farming the ocean. Here Bren Smith—pioneer of regenerative ocean agriculture—introduces the world to a groundbreaking solution to the global climate crisis.

A genre-defining “climate memoir,” Eat Like a Fish interweaves Smith’s own life—from sailing the high seas aboard commercial fishing trawlers to developing new forms of ocean farming to surfing the frontiers of the food movement—with actionable food policy and practical advice on ocean farming. Written with the humor and swagger of a fisherman telling a late-night tale, it is a powerful story of environmental renewal, and a must-read guide to saving our oceans, feeding the world, and—by creating new jobs up and down the coasts—putting working class Americans back to work.

Bren Smith: Bren Smith is a former commercial fisherman turned ocean farmer who pioneered the development of restorative 3D ocean farming. Born and raised in Newfoundland, he left high school at the age of 14 to work on fishing boats from the Grand Banks to the Bering Sea. His writing has appeared in The New York Times, National Geographic, The Atlantic, and elsewhere; his ocean farm won the Buckminster Fuller Challenge for ecological design, and, in 2017, was named one of TIME magazine’s Best Inventions. He is the owner of Thimble Island Ocean Farm, and Executive Director of the non-profit Greenwave, which trains new ocean farmers.