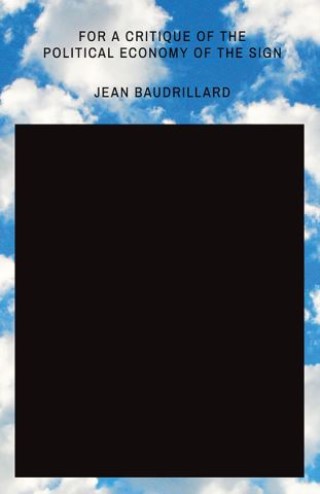 For a Critique of the Political Economy of the Sign

A material analysis of the sign which deepens Marx's critique of political economy for spectacular times.

What if the problems of modern society don't come from production, but rather consumption and the system of cultural signs? In this classic work from the defining intellectual of the postmodern, Jean Baudrillard, For a Critique of the Political Economy of the Sign takes Marx's critique of political economy and its analysis of the commodity form as the starting point for an analysis of signs and their meaning in modern society. Influenced by Lefebvre's critique of everyday life, Barthes's semiology, and Situationism, Baudrillard analyses how objects are encoded within the system of signs and meanings that constitute contemporary media and consumer societies. Combining semiological studies and sociology of the consumer society, For a Critique of the Political Economy of the Sign contains Baudrillard's most extensive engagement with Marxism and shows him at a critical juncture for the development of his thought.

Jean Baudrillard: Jean Baudrillard (1929-2007) began teaching sociology at the Université de Paris-X in 1966. He retired from academia in 1987 to write books and travel until his death in 2007. His many works include Simulations and Simulacra, America, The Perfect Crime, The System of Objects, Passwords, The Transparency of Evil, The Spirit of Terrorism, and Fragments, among others.