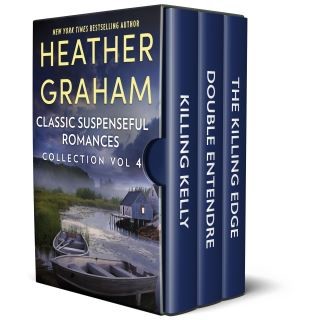 Along with fame, actress Kelly Trent has acquired a deranged fan who has confused her with the malicious diva she plays on a popular daytime soap. For her safety, she takes a break from the show, but agrees to appear in a music video. Miami cop turned dance instructor Doug O’Casey has realized that someone close to Kelly wants more than her character killed off the show—they want her dead for real!

Bret McAllistair’s determination to always get the scoop built his career but destroyed his marriage. So when Bret revives his connection with his estranged wife, Colleen, she thinks he’s after her big story. Being together again stirs up old passions, but Colleen can’t decide if she can trust him…or her own heart.

Chloe Marin was a teenager when a beachside party turned into a bloodbath. She was lucky to escape. Ten years later, as a psychologist consulting with the police, Chloe is brought in on the case of a missing swimsuit model with PI Luke Cane. Chloe will have to learn to trust him if they’re going to discover what happened to the girl. When another mass murder occurs, Chloe is beginning to think her presence isn’t a coincidence…

Heather Graham: New York Times and USA Today bestselling author Heather Graham has written more than a hundred novels. She's a winner of the RWA's Lifetime Achievement Award, and the Thriller Writers' Silver Bullet. She is an active member of International Thriller Writers and Mystery Writers of America. For more information, check out her websites: TheOriginalHeatherGraham.com, eHeatherGraham.com, and HeatherGraham.tv. You can also find Heather on Facebook.