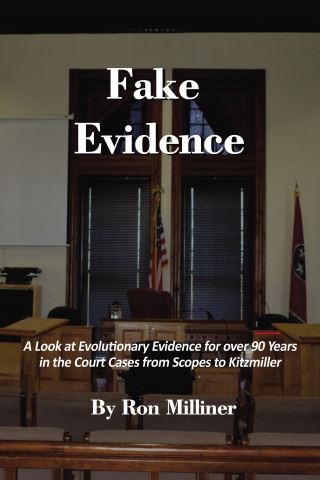 The first chapter of the book looks at court evidence in light of the nature of science. Court cases have been decided based on fingerprints, handwriting samples, DNA, etc. only to be overturned later. Why are evolution cases allowed to stand when the evidence used in the trial is no longer valid?

The State of Tennessee v. John Thomas Scopes is the first evolution-creation case. It is discussed in chapter two. Because of its well-known attorneys, Clarence Darrow and William Jennings Bryan, it attracted national attention. In this trial, a hoax like the Piltdown Man was offered as evidence for the proof of evolution.

Chapter three moves ahead to the 1960s and considers Epperson v. Arkansas that declared laws forbidding the teaching of evolution as unconstitutional. This case is also considered in light of two other court cases decided that decade--Engel v. Vitale that removed state-initiated prayers in the classroom and Abington School District v. Schempp that ruled against a daily Bible reading in school. How were these cases similar?

Since evolution had to be taught, efforts were made to have evolution and creation taught side by side. These efforts brought about two court cases--McLean v. Arkansas Board of Education and Edwards v. Aguillard. McLean v. Arkansas Board of Education dealt with an Arkansas law and was decided in the United States District Court for the Eastern District of Arkansas and was limited to that region. Edwards v. Aquillard was a similar law passed in Louisiana which was appealed all the way to the United States Supreme Court. The justices declared the teaching of scientific creationism was religious teaching and thus unconstitutional.

The final case that is examined in this work is Kitzmiller v. Dover Area School District. The school board in Dover, Pennsylvania wanted to see its students become aware of intelligent design. A good deal of this case centered on showing that intelligent design is religious teaching so that the judge could rule against it based on the earlier court cases against a religious view being taught in public schools.

Fake Evidence closes with a look at some of the view expressed against religion in Kitzmiller v. Dover Area School District and the dangers found in those views. The book also contains several appendices, including one on “The Fruits of Evolution.”

Ron Milliner has worked in PK-12 schools and colleges.  As the director of the Kentucky of Academy of Technology Education, he had the opportunity to work with numerous teachers across the state in developing instructional technology lessons.  As a member of the National Science Teachers Association, the National Association of Biology Teachers, and the National Council for the Social Studies, he has presented at both national and state science conferences.