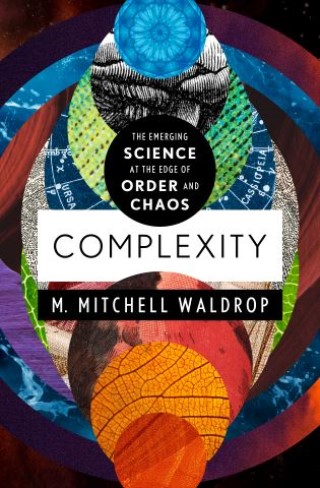 The Emerging Science at the Edge of Order and Chaos

“If you liked Chaos, you’ll love Complexity. Waldrop creates the most exciting intellectual adventure story of the year” (The Washington Post).

In a rarified world of scientific research, a revolution has been brewing. Its activists are not anarchists, but rather Nobel Laureates in physics and economics and pony-tailed graduates, mathematicians, and computer scientists from all over the world. They have formed an iconoclastic think-tank and their radical idea is to create a new science: complexity. They want to know how a primordial soup of simple molecules managed to turn itself into the first living cell—and what the origin of life some four billion years ago can tell us about the process of technological innovation today.

This book is their story—the story of how they have tried to forge what they like to call the science of the twenty-first century.

“Lucidly shows physicists, biologists, computer scientists and economists swapping metaphors and reveling in the sense that epochal discoveries are just around the corner . . . [Waldrop] has a special talent for relaying the exhilaration of moments of intellectual insight.” —The New York Times Book Review

“Where I enjoyed the book was when it dove into the actual question of complexity, talking about complex systems in economics, biology, genetics, computer modeling, and so on. Snippets of rare beauty here and there almost took your breath away.” —Medium

“[Waldrop] provides a good grounding of what may indeed be the first flowering of a new science.” —Publishers Weekly

M. Mitchell Waldrop:
M. Mitchell Waldrop is a freelance writer and editor. He earned a PhD in elementary particle physics at the University of Wisconsin in 1975 and a master’s degree in journalism at Wisconsin in 1977. From 1977 to 1980, he was a writer and West Coast bureau chief for Chemical and Engineering News. From 1980 to 1991, he was a senior writer at Science magazine, where he covered physics, space, astronomy, computer science, artificial intelligence, molecular biology, psychology, and neuroscience. Waldrop was a freelance writer from 1991 to 2003 and from 2007 to 2008; in between he worked in media affairs for the National Science Foundation from 2003 to 2006. He was the editorial page editor at Nature magazine from 2008 to 2010, and a features editor at Nature until 2016. He is the author of Man-Made Minds (1987), about artificial intelligence; Complexity (1992), about the Santa Fe Institute and the new sciences of complexity; and The Dream Machine (2001), on the history of computing. He lives in Washington, DC, with his wife, Amy E. Friedlander.