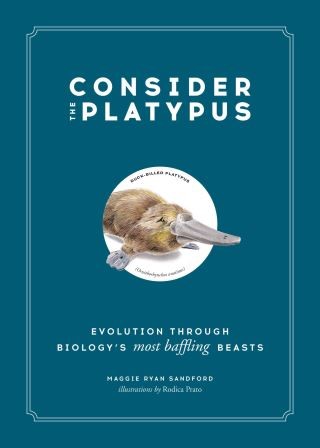 Evolution through Biology's Most Baffling Beasts

Interested in the origins of the species? Consider the Platypus uses pets such as dogs and cats as well as animal outliers like the axolotl and naked mole rat to wittily tackle mind-bending concepts about how evolution, biology, and genetics work.
Consider the Platypus explores the history and features of more than 50 animals to provide insight into our current understanding of evolution. Using Darwin's theory as a springboard, Maggie Ryan Sandford details scientists' initial understanding of the development of creatures and how that has expanded in the wake of genetic sequencing, including the:
Surprising, witty, and impeccably researched, Sandford describes each animal's significant features and how these have adapted to its environment, such as the zebra finch's beak shape, which was observed by Charles Darwin and is a cornerstone of his Theory of Evolution. With scientifically accurate but charming art by Rodica Prato, Consider the Platypus showcases species as diverse as the sloth, honey bee, cow, brown kiwi, and lungfish, to name a few, to tackle intimidating concepts is a accessible way.