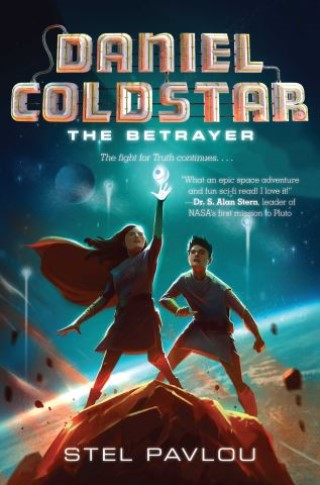 In this exciting sequel to The Relic War, adventure calls…but can Truth prevail?

The galaxy is at war. And Daniel Coldstar and his Truth Seeker friends are traversing the galaxy, saving refugees from destroyed worlds and trying to locate the stolen Book of Planets before the evil Sinja use it to cause any more damage.

Meanwhile, someone wants Daniel Coldstar to stray from his mission and sends him messages that lead him right to an abandoned ship—a ship that has mysterious ties to Daniel’s past.

What does the anonymous messenger want with him? And who can Daniel really trust in a galaxy filled with the Sinja’s devious lies? Ever since his old friend Blink and an anatom named Hex betrayed him, Daniel isn’t sure.

When the messages eventually lead Daniel to Ionica Lux’s home, long-held secrets are finally revealed and Daniel and Ionica will have to put their lives on their line to save their loved ones and destroy the Sinja forces once and for all.