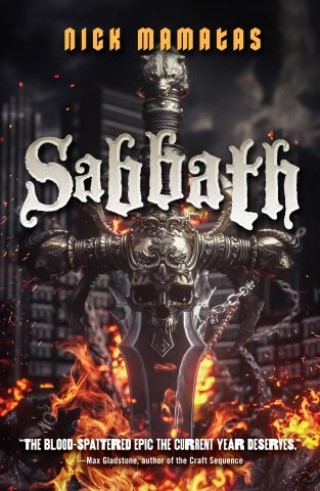 The infamous eleventh-century warrior Hexen Sabbath is plucked from death and certain damnation by a being claiming to be an angel of the Lord, and finds himself dropped into contemporary Manhattan with no clothes, no weapons, no resources, and one mission—to track down and kill the living personifications of the Seven Deadly Sins before they bring about Armageddon.

With time running out and his only ally a destitute art gallery owner, Sabbath must fight his way through New York's elite and challenge the world's most powerful man, or an eternity of suffering will be his, and our, only reward.

At the Publisher's request, this title is being sold without Digital Rights Management Software (DRM) applied.

Nick Mamatas: Nick Mamatas is the author of several novels, including the instant cult classic Move Under Ground and the Lovecraftian crime novel I Am Providence. His short fiction has appeared in Best American Mystery Stories, Year's Best Science Fiction & Fantasy, Tor.com and dozens of other anthologies and magazines—much of it was recently collected in The People's Republic of Everything. Nick is also an award-winning editor and anthologist: his books include the Bram Stoker Award winner Haunted Legends (co-edited w/ Ellen Datlow), the Locus Award nominees The Future is Japanese and Hanzai Japan (both w/ Masumi Washington) and the hybrid cocktail/flash fiction title Mixed Up (w/ Molly Tanzer).