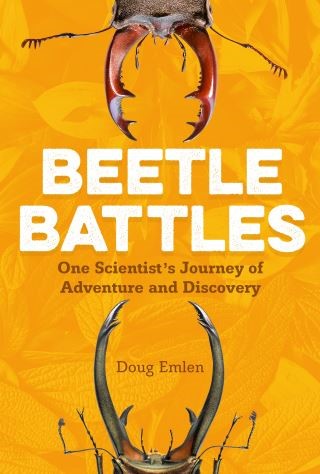 One Scientist's Journey of Adventure and Discovery

Join scientist Doug Emlen on his quest to find out why an elusive type of beetle grows weapons that are enormous for its body size.

What does it take to be a scientist in the field?

Doug Emlen is a scientist. He studies beetles.

Specifically, he studies the evolution of beetle weapons—how their horns and armor change to better suit them in different environments.

This book starts with a mystery: Doug wanted to know why a particular type of beetle developed a massive evolutionary weapon. He wanted to know how these changes happened and what advantages these enormous weapons gave the tiny dung beetles.

So, he went to visit.

Part travel diary and part scientific exploration, Beetle Battles takes you deep into the South American rainforest to monitor beetles in their own habitat. Packed with color photographs, extensive back matter, and entertaining anecdotes, this book will make beetle fans out of all its young readers.

Douglas J. Emlen: Doug Emlen is the Director of Organismal Biology, Ecology, and Evolution at the University of Montana. His adult book, Animal Weapons: The Evolution of Battle, won the Phi Beta Kappa Award in Science, and his textbook, Evolution: Making Sense of Life (co-authored with award-winning journalist Carl Zimmer), is presently adopted by more than 250 universities and colleges. He starred in the NOVA documentary Extreme Animal Weapons. Mr. Emlen lives in Montana with his family (and a whole bunch of beetles).