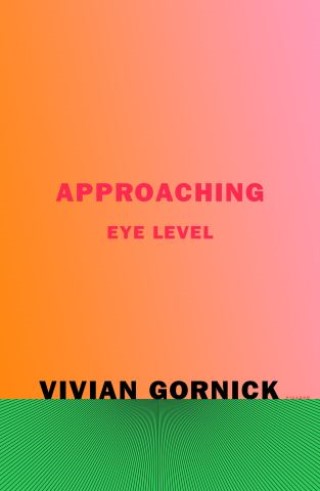 Vivian Gornick's Approaching Eye Level is a brave collection of personal essays that finds a quintessentially contemporary woman (urban, single, feminist) trying to observe herself and the world without sentiment, cynicism, or nostalgia. Whether walking along the streets of New York or teaching writing at a university, Gornick is a woman exploring her need for conversation and connection—with men and women, colleagues and strangers. She recalls her stint as a waitress in the Catskills and a failed friendship with an older woman and mentor, and reconsiders her experiences in the feminist movement, while living alone, and in marriage.

Turning her trademark sharp eye on herself, Gornick works to see her part in things—how she has both welcomed and avoided contact, and how these attempts at connections have enlivened and, at times, defeated her. First published in 1996, Approaching Eye Level is an unrelentingly honest collection of essays that finds Gornick at her best, reminding us that we can come to know ourselves only by engaging fully with the world.

Vivian Gornick: Vivian Gornick is the author of several books, including the acclaimed memoir Fierce Attachments, named the best memoir of the past 50 years by the New York Times Book Review in 2019; the essay collections The End of the Novel of Love and The Men in My Life, both of which were nominated for the National Book Critics Circle Award for Criticism; and The Odd Woman and the City, a finalist for the National Book Critics Circle Award for Autobiography. She began her career as a staff writer for The Village Voice in 1969, and her work has since appeared in The New York Times, The Nation, The New York Review of Books, The Atlantic, and many other publications.