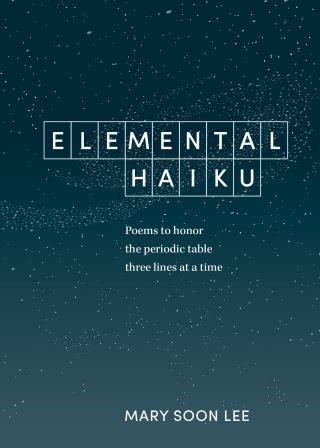 Poems to honor the periodic table, three lines at a time

A fascinating little illustrated series of 118 haiku about the Periodic Table of Elements, one for each element, plus a closing haiku for element 119 (not yet synthesized).

Originally appearing in Science magazine, this gifty collection of haiku inspired by the periodic table of elements features all-new poems paired with original and imaginative line illustrations drawn from the natural world. Packed with wit, whimsy, and real science cred, each haiku celebrates the cosmic poetry behind each element, while accompanying notes reveal the fascinating facts that inform it. Award-winning poet Mary Soon Lee's haiku encompass astronomy, biology, chemistry, history, and physics, such as "Nickel, Ni: Forged in fusion's fire,/flung out from supernovae./Demoted to coins." Line by line, Elemental Haiku makes the mysteries of the universe's elements accessible to all.

Mary Soon Lee: MARY SOON LEE is an award-winning poet and fiction writer. She won the Rhysling Award and the Elgin Award, and has been nominated for a Pushcart Prize and the Theodore Sturgeon Memorial Award. Her work has appeared in a wide range of venues, including Atlanta Review, Cider Press Review, American Scholar, Spillway, and Rosebud, as well as award-winning fiction and fantasy magazines Lightspeed, Fantasy & Science Fiction, and Analog. Before she took up writing, she had a more analytical background, with degrees in mathematics and computer science from Cambridge University and an MSc in astronautics and space engineering from Cranfield University. Born and raised in London, she has called the United States home for twenty years.