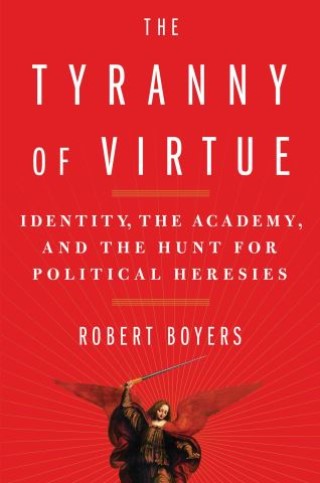 The Tyranny of Virtue

Identity, the Academy, and the Hunt for Political Heresies

From public intellectual and professor Robert Boyers, “a powerfully persuasive, insightful, and provocative prose that mixes erudition and first-hand reportage” (Joyce Carol Oates) addressing recent developments in American culture and arguing for the tolerance of difference that is at the heart of the liberal tradition.

Written from the perspective of a liberal intellectual who has spent a lifetime as a writer, editor, and college professor, The Tyranny of Virtue is a “courageous, unsparing, and nuanced to a rare degree” (Mary Gaitskill) insider’s look at shifts in American culture—most especially in the American academy—that so many people find alarming.

Part memoir and part polemic, Boyers’s collection of essays laments the erosion of standard liberal values, and covers such subjects as tolerance, identity, privilege, appropriation, diversity, and ableism that have turned academic life into a minefield. Why, Robert Boyers asks, are a great many liberals, people who should know better, invested in the drawing up of enemies lists and driven by the conviction that on critical issues no dispute may be tolerated? In stories, anecdotes, and character profiles, a public intellectual and longtime professor takes on those in his own progressive cohort who labor in the grip of a poisonous and illiberal fundamentalism. The end result is a finely tuned work of cultural intervention from the front lines.

Robert Boyers: Robert Boyers is editor of Salmagundi, professor of English at Skidmore College, and director of the New York State Summer Writers Institute. He is the author of ten previous books and the editor of a dozen others. He writes often for such magazines as Harper’s, The New Republic, The Nation, Yale Review, and Granta.