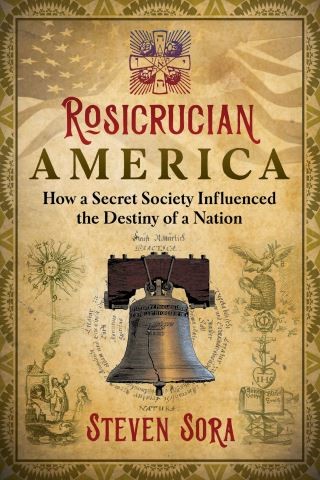 How a Secret Society Influenced the Destiny of a Nation

An in-depth history of Rosicrucianism, its key members, and their roles in the formation and settling of America

• Explores Sir Francis Bacon and Dr. John Dee’s deep influence on England’s colonization of America as well as the Rosicrucian influence on the Founding Fathers and on cities such as Philadelphia and Williamsburg

Dr. John Dee and his polymath protégé Sir Francis Bacon were the most influential men in the court of Queen Elizabeth I, part of an elite group with invisible control throughout Europe. And, as Steven Sora reveals, not only were they key members of the Rosicrucians, they were the driving force behind England’s colonization of the New World and the eventual establishment of the United States.

From Avalon in Newfoundland to New England to Pennsylvania and Virginia, Sora shows how Bacon and Dee’s Rosicrucian impact is felt throughout North America. He details Bacon’s possible authorship of the anonymous Rosicrucian texts of the early 1600s, his connections with Sir Walter Raleigh’s School of Night, and the origins of Rosicrucianism in Bacon’s Order of the Helmet. He explains how Bacon envisioned America as the New Atlantis, a utopia where liberty and freedom of learning prevailed--a key tenet of the “Invisible College” of the Rosicrucian Order--and how Dee convinced the Queen that England had rightful claims in the New World by drawing on legends of both King Arthur and Welsh Prince Madoc voyaging West to America.

Sora looks at Rosicrucian influences on the Founding Fathers and earliest settlers of America, such as Washington, Franklin, and William Penn of Pennsylvania, on the American Revolution, and on American colonies, such as the Williamsburg colony. He details how Penn invited Rosicrucians to Philadelphia and how the city’s layout follows esoteric principles, including a direct reference to Bacon’s New Atlantis. Moving into the 1800s and beyond, he reveals how a handful of Rosicrucians served as the Inner Sanctum of the Knights of the Golden Circle and how Rosicrucians are behind the Georgia Guidestones, carved granite monoliths with messages in ancient languages.

Providing a thorough and expansive view of Rosicrucianism, its occult origins, and its deep imprint on America, Sora shows how this secret society still continues to exert invisible influence on the modern world.

Steven Sora: Steven Sora has been researching historical enigmas since 1982 and is the author of The Triumph of the Sea Gods, The Lost Treasure of the Knights Templar and Secret Societies of America’s Elite. He lives in Allentown, Pennsylvania.