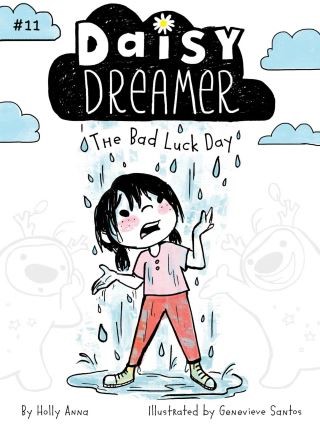 Every kid in the world has had a Bad Luck Day, but Daisy Dreamer’s might be the unluckiest Bad Luck Day ever in this eleventh chapter book in the series.

It started with a broken mirror. Daisy Dreamer should have been more careful, but accidents happen. But one broken mirror leads to an outrageous day for Daisy and her imaginary friend, Posey. Now there’s a black cat following them everywhere, ladders to walk under around every corner, and a mischievous mirror version of Posey named Yesop has appeared, and he thinks bad luck is the best thing in the world! It’s up to Daisy and her dreamy outlook to save everyone from the Bad Luck Day.

With easy-to-read language and illustrations on almost every page, the Daisy Dreamer chapter books are perfect for emerging readers.

Holly Anna: Holly Anna has always had a wild imagination. When she was little, she used to doodle drawings that would transport herself and her friends to a wonderful world of make believe. Now she visits other worlds through writing. Holly lives in San Jose, California, with her family. They have four cats: Rocket J. Squirrel, Le Mew, The Honest John Wookenchops a.k.a. “Wookie”, and Noel.Genevieve Santos is an illustrator born, raised, and living in San Jose, California, and sole proprietor of a small stationery company, Le Petit Elefant. Wanderlust got the best of her so she’s traveled to thirty-one countries before turning thirty, sometimes backpacking, sometimes by camper van, sometimes on her own, but always with a sketchbook. Her love for animation started at a young age, and is what drives her to draw the slightest observations. She also has an insatiable weakness for ice cream.