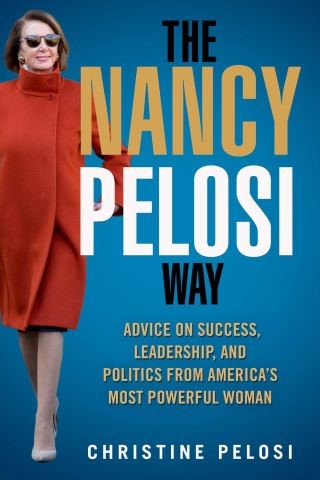 Advice on Success, Leadership, and Politics from America's Most Powerful Woman

“Her story is unique, but I hope the lessons are universal.”—Christine Pelosi

Understand and apply the wisdom of Madam Speaker Nancy Pelosi—through the eyes of someone who knows her best.

In this personal and important book Christine Pelosi takes a close look at how her mother went from homemaker to Speaker of the House of Representatives and became the most powerful female politician in America. Her book addresses Speaker Pelosi’s role in current events, and offers advice on politics, family, and friendship gleaned from her mother’s life.

From her childhood in Baltimore to her hands-on motherhood in San Francisco to her national leadership, this book demonstrates how a mother of five and grandmother of nine achieved her success. Chapters include:

In 2007, Nancy Pelosi became the highest-ranking elected female government official in US history when she started her tenure as Speaker of the House of Representatives. In January 2019, she began her third term as Speaker during a tumultuous time in American political history. Having represented San Francisco for thirty-two years, she has become well-known for her work to expand health care, lift up workers, protect the environment, promote human rights, and make progress for the American people regardless of the president in the White House or the party controlling Congress.

This book serves as the perfect guide for anyone looking to enter public service or prosper as a leader in their own field.

Christine Pelosi: Christine Pelosi is an attorney and advocate serving as counsel for We Said Enough and partner at IMPACT. She has worked as a Deputy City Attorney and Assistant District Attorney in San Francisco, special counsel to HUD in the Clinton-Gore administration, and a chief of staff on Capitol Hill. Elected as California Democratic Party Women’s Caucus Chair and Democratic National Committee Executive Committeewoman, Pelosi is the author of Campaign Boot Camp and Campaign Boot Camp 2.0 and has traveled to forty-one states and four foreign countries conducting leadership trainings. A member of the San Francisco Giants Community Fund Board, Christine resides in San Francisco, California, with her husband, Emmy-nominated filmmaker Peter Kaufman, and their daughter, Isabella.