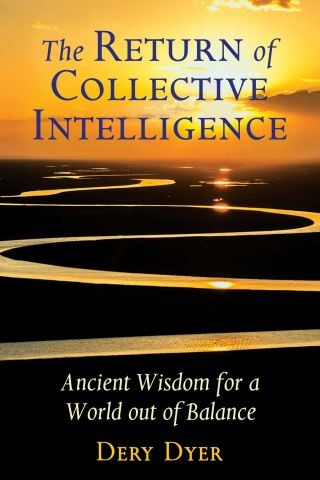 The Return of Collective Intelligence

Ancient Wisdom for a World out of Balance

Reveals how we can each reconnect to collective intelligence and return our world to wholeness, balance, and sanity

• Explains how collective intelligence manifests in flocks of birds, instantaneous knowing in indigenous peoples, and the power of sacred places

• Offers ways for us to reconnect to the infinite source of wisdom that fuels collective intelligence and underscores the importance of ceremony, pilgrimage, and initiation

• Draws on recent findings in New Paradigm science, traditional teachings from indigenous groups from North, South, and Central America and Siberia, as well as sacred geometry, deep ecology, and expanded states of consciousness

For our ancestors, collective intelligence was a normal part of life. We see it today as the mysterious force that enables flocks of birds, swarms of bees, and schools of fish to function together in perfect synchrony, communicating and cooperating at some undetectable level. At its most subtle, it’s an instantaneous knowing, shared by members of a group, of the wisest course of action that will benefit all.

As Dery Dyer reveals, collective intelligence still resides within each of us, and it is the key to restoring balance and harmony to our world. She shows how it occurs spontaneously when individuals who share a need and a purpose instinctively “self-organize” into a group and function with no leader or central authority. Such groups exhibit abilities much greater than what any of their members possess individually--or what can be replicated with artificial intelligence. Dyer explains, due to an unquestioning dependence on technology, modern humanity has forgotten how to connect with collective intelligence and fallen into collective stupidity, otherwise known as mob mind or groupthink, which is now endangering the interconnected web of life on Earth.

Drawing on recent findings in New Paradigm science, traditional teachings from indigenous groups, as well as sacred geometry, deep ecology, and expanded states of consciousness, the author shows how the ability to think and act collectively for the highest good is hardwired in all living beings. She explains how to release ourselves from enslavement by technology and use it more wisely toward the betterment of all life. Underscoring the vital importance of ceremony, pilgrimage, and initiation, she offers ways for us to reconnect to the infinite source of wisdom that fuels collective intelligence and which manifests everywhere in the natural world.

Revealing that once we relearn how to hear the Earth, we can heal the Earth, Dyer shows how each of us has a vital role to play in restoring our world to wholeness.

Dery Dyer: Dery Dyer is former editor and publisher of Costa Rica’s award-winning English-language newspaper, The Tico Times, where she worked for over 40 years. She holds degrees in literature and journalism from U.S. and Costa Rican universities and has studied indigenous spirituality in many different parts of the world. She lives in Costa Rica.