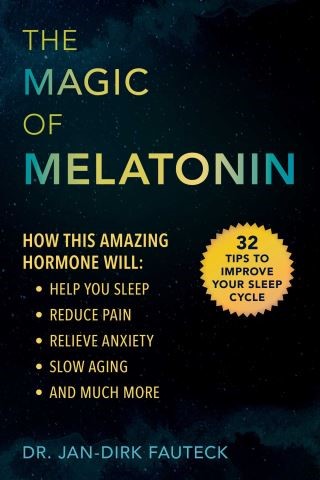 The Magic of Melatonin

How this Amazing Hormone Will Help You Sleep, Reduce Pain, Relieve Anxiety, Slow Aging, and Much More

Everything you need to know about the sleep-regulating hormone melatonin!

We've always been told maintaining a healthy sleep cycle is of utmost importance to your day-to-day health. But have we ever been told why?

Anyone familiar with chronobiology (the science of natural physiological rhythms) knows that the hormone melatonin is the foundation hormone for the circadian rhythm research. In fact, melatonin and sleep research is one of the most fundamental and best-known rhythms in the human body. Disturbance of the melatonin cycle due to any reason interferes with the sleep/wake cycle, which ultimately leads to a number of other neurobehavioral and psychological problems.

Due to the widespread misuse of light at night, modern societies no longer hold a clear distinction between day and night. This increase in light pollution at night interferes with the ability of the pineal gland to produce and disperse melatonin properly. As a result, either no or a severely dampened melatonin rhythm exists in individuals exposed to artificial light during the normal dark hours, which includes most people living in cities and in all individuals who work at night. This suppression of a distinct melatonin rhythm and all other biological cycles represents a serious perturbation of the biological clock of many organs, contributing to pathophysiology.

Dr. Fauteck also addresses the impact of proper supplemental melatonin and various studies and research done on the topic. Melatonin has been widely used to correct problems of sleep disorders, and while this book looks into that research further and breaks down the impact of melatonin and sleep, it also addresses research that addresses melatonin use for its ability to regulate the circadian clock in general and impact other areas of health such oxidative stress, neuropsychiatric disorders, headaches, chronic pain, digestion, diabetes, fertility, pregnancy, cancer, and many age-related diseases.

In this book, Dr. Fauteck summarizes critical information related to the necessity of maintaining regular biological rhythms and describes the pathological consequences of circadian rhythm disturbances. He provides a clear description of how melatonin is produced and secreted, how the prevailing artificially imposed light/dark cycle can disturb its rhythm, and how this translates into other potential pathologies.

Jan-Dirk Fauteck: Dr. Jan-Dirk Fauteck is also the author of The Chronodiet and A Matter of Time: The Positive Power of Chronobiology. He is an internationally recognized specialist in chronobiology who graduated from the university of Milan Italy as a medical doctor. For over two decades he has studied the role of internal clocks and biological rhythms within the human organism. He is the founding member and scientific director of the European Academy of Preventive and Anti-Aging Medicine, EA3M. In addition, he is the founding member and secretary of Interchron, the international forum for chronobiology. He has published more than 60 scientific papers and books concerning chronobiology and its role on human health. He resides in Germany.