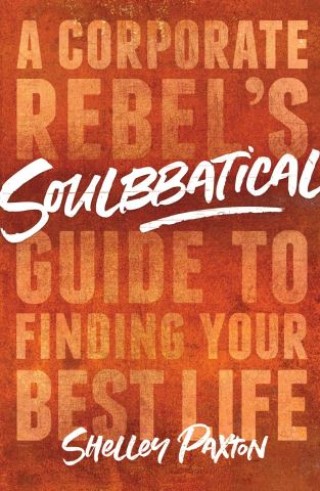 A Corporate Rebel's Guide to Finding Your Best Life

Part memoir, part manifesto, Soulbbatical is an invitation to become Chief Soul Officer of your own life—and to open up a whole new world of possibility.

Former Harley-Davidson executive Shelley Paxton did just that. She walked away at the peak of her twenty-six-year marketing career and embarked on a profoundly personal journey to reconnect with her true purpose and deepest desires. She called it her “Soulbbatical,” and it not only changed her life, it became her calling.

Paxton had a wildly successful life by most definitions—iconic brands, executive titles, and a globe-trotting career that took her to over sixty countries. She had one of the coolest jobs in the world, yet couldn’t shake the feeling that she had lost herself along the way. Something was missing.

Here, she takes you on a sometimes harrowing, often hilarious journey through the illness, divorce, addiction, and tragedy that finally woke her up. Suddenly she was rebelling for her best life, and embracing a new mission: to encourage others to live their most authentic, courageous, and purposeful lives—today.

Soulbbatical is an unconventional, exhilarating, and totally badass road map to discovering what you really want—and getting it. Because no matter how far you’ve strayed from your soul’s true path, it’s never too late for transformation.

Shelley Paxton: Shelley Paxton is an author, speaker, and transformational coach. She spent twenty-six years as a highly regarded marketing and advertising executive stewarding some of the world’s most iconic brands, including Harley-Davidson, Visa, McDonald’s, and AOL. In 2016 she left the corporate world to become Chief Soul Officer of her life and, ultimately, her own company. She launched Soulbbatical with the mission to liberate the souls of leaders and organizations by inspiring them to realize their greatest purpose, possibility, and impact. As a certified professional coach, she works with executives at Fortune 100 companies, and with fellow rebel soul individuals and entrepreneurs. Shelley has also trained with some of the top teachers in the world including Brené Brown, researcher and five-time NY Times bestselling author, and master coach and coauthor of The Prosperous Coach Rich Litvin.

Shelley is based in Chicago (when she’s not indulging her wanderlust). She’s living into her highest values of freedom, courage, and authenticity. And she’s obsessed with the color orange. Follow her on Instagram @Soulbbatical, on Facebook @SoulbbaticalCoaching, or on her website Soulbbatical.com.