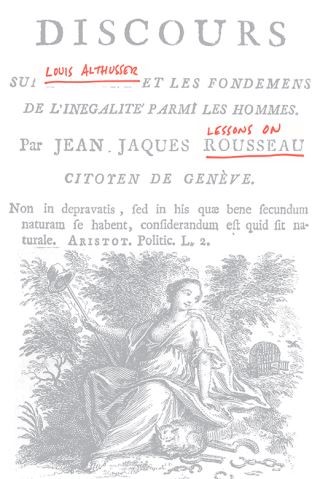 Althusser delivered these lectures on Rousseau's Discourse on the Origins of Inequality at the École normale supérieure in Paris in 1972. They are fascinating for two reasons. First, they gave rise to a new generation of Rousseau scholars, attentive not just to Rousseau's ideas, but also to those of his concepts that were buried beneath metaphors or fictional situations and characters. A new way of coming to terms with Rousseau's theoretical rigour, beneath his apparent reveries and sentimental flights of fancy, was here put to work. Second, we are now discovering that the 'late Althusser's' theses about aleatory materialism and the need to break with the strict determinism of theories of history in order to devise a new philosophy 'for Marx' were being worked out well before 1985 - in this reading of Rousseau dating from twelve years earlier, which introduces into Rousseau's text the ideas of the void, the accident, the take, and the necessity of contingency.

Louis Althusser: Louis Althusser was born in Algeria in 1918 and died in France in 1990. He taught philosophy for many years at the Ecole Normale Supérieure in Paris, and was a leading intellectual in the French Communist Party. His books include For Marx; Reading Capital (with Etienne Balibar); Essays in Ideology; Politics and History: Montesquieu, Rousseau, Marx; Machiavelli and Us; and The Spectre of Hegel.