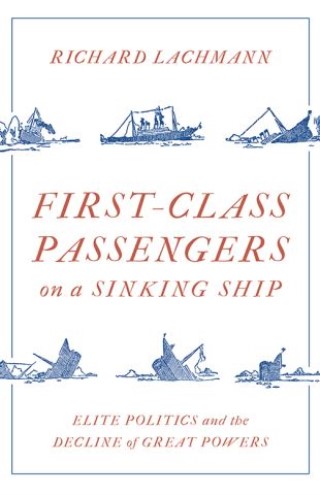 Elite Politics and the Decline of Great Powers

Why great powers decline, from Spain to the United States

The extent and irreversibility of US decline is becoming ever more obvious as America loses war after war and as one industry after another loses its technological edge. Lachmann explains why the United States will not be able to sustain its global dominance, and contrasts America's relatively brief period of hegemony with the Netherlands' similarly short primacy and Britain's far longer era of leadership.

Decline in all those cases was not inevitable and did not respond to global capitalist cycles. Rather, decline is the product of elites' success in grabbing control over resources and governmental powers. Not only are ordinary people harmed, but also capitalists become increasingly unable to coordinate their interests and adopt policies and make investments necessary to counter economic and geopolitical competitors elsewhere in the world.

Conflicts among elites and challenges by non-elites determine the timing and mold the contours of decline. Lachmann traces the transformation of US politics from an era of elite consensus to present-day paralysis combined with neoliberal plunder, explains the paradox of an American military with an unprecedented technological edge unable to subdue even the weakest enemies, and the consequences of finance's cannibalization of the US economy.

Richard Lachmann: Richard Lachmann is Professor at the University of Albany-SUNY and is the author of Capitalists In Spite of Themselves: Elite Conflict and Economic Transitions in Early Modern Europe (Oxford, 2000), States and Power (Polity 2010) and What Is Historical Sociology? (Polity 2013).