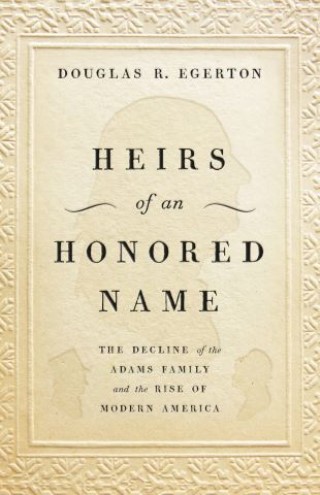 Heirs of an Honored Name

John and Abigail Adams founded a famous political family, but they would not witness its calamitous fall from grace. When John Quincy Adams died in 1848, so began the slow decline of the family's political legacy.

In Heirs of an Honored Name, award-winning historian Douglas R. Egerton depicts a family grown famous, wealthy -- and aimless. After the Civil War, Republicans looked to the Adamses to steer their party back to its radical 1850s roots. Instead, Charles Francis Sr. and his children -- Charles Francis Jr., John Quincy II, Henry and Clover Adams, and Louisa Adams Kuhn -- largely quit the political arena and found refuge in an imagined past of aristocratic preeminence.

An absorbing story of brilliant siblings and family strain, Heirs of an Honored Name shows how the burden of impossible expectations shaped the Adamses and, through them, American history.