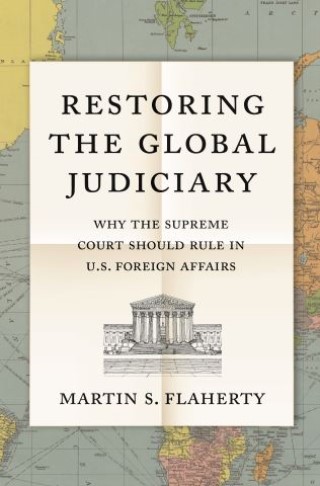 Why the Supreme Court Should Rule in U.S. Foreign Affairs

In the past several decades, there has been a growing chorus of voices contending that the Supreme Court and federal judiciary should stay out of foreign affairs and leave the field to Congress and the president. Challenging this idea, Restoring the Global Judiciary argues instead for a robust judicial role in the conduct of U.S. foreign policy. With an innovative combination of constitutional history, international relations theory, and legal doctrine, Martin Flaherty demonstrates that the Supreme Court and federal judiciary have the power and duty to apply the law without deference to the other branches.

Turning first to the founding of the nation, Flaherty shows that the Constitution’s original commitment to separation of powers was as strong in foreign as domestic matters, not least because the document shifted enormous authority to the new federal government. This initial conception eroded as the nation rose from fledgling state to superpower, fueling the growth of a dangerously formidable executive that today asserts near-plenary foreign affairs authority. Flaherty explores how modern international relations makes the commitment to balance among the branches of government all the more critical and he considers implications for modern controversies that the judiciary will continue to confront.

At a time when executive and legislative actions in the name of U.S. foreign policy are only increasing, Restoring the Global Judiciary makes the case for a zealous judicial defense of fundamental rights involving global affairs.