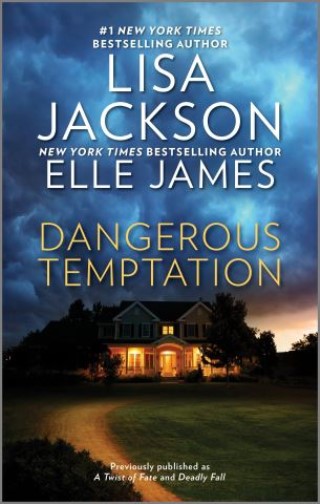 A Twist of Fate by Lisa Jackson

When Kane Webster buys First Puget Bank, he knows he’s buying trouble. Someone is embezzling funds, and the evidence points to Erin O’Toole. Kane is determined to bring her down—until he meets her. He never expects to be swept into a passionate affair with a woman he barely knows. But can Erin let herself get involved with a man who suspects her of criminal intent?

In a Gothic mansion on a windy coast, former soldier Dixie Reeves and her client, billionaire Andrew Stratford, are in grave danger. The single dad has hired her to help him protect his daughter from a mysterious threat. As their enemy closes in, even tough-as-nails Dixie has to hold her nerve…and keep her guard up to stop herself from falling for Andrew and his adorable little girl.

Lisa Jackson: Lisa Jackson is a #1 New York Times bestselling author of more than seventy books including romantic suspense, thrillers and contemporary and historical romances. She is a recipient of the RT Book Reviews Reviewers’ Choice Award and has also been honored with their Career Achievement Award for Romantic Suspense. Born in Oregon, she continues to make her home among family, friends and dogs in the Pacific Northwest. Visit her at www.lisajackson.com.Raised an Air Force brat, Elle James got her work ethic from her dad, creativity from mom and inspiration from her sister. As a member of the reserves, she's traveled, managed a career, and raised three children. She and her husband even raised ostriches and emus. Ask her what it's like to go toe-to-toe with a 350-pound bird! Former manager of computer programmers, Elle is happy to write full time in NW Arkansas.