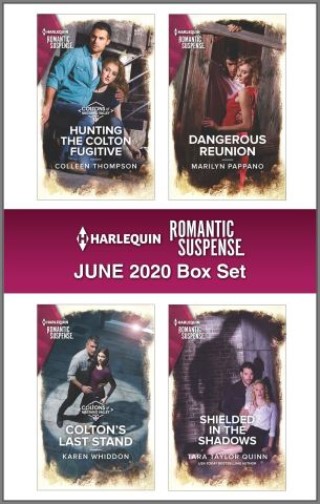 Looking for heart-racing romance and breathless suspense? Want stories filled with life-and-death situations that cause sparks to fly between adventurous, strong women and brave, powerful men?

Harlequin® Romantic Suspense brings you all that and more with four new full-length titles in one collection!

The Coltons of Mustang Valley

Sparks—and bullets—fly when Sierra Madden, a bounty hunter with loan sharks on her tail, and framed fugitive Ace Colton team up to find out who really shot his father. The Colton family holds tremendous power, which puts them in mortal danger…

The Coltons of Mustang Valley

FBI agent Fiona Evans has been sent undercover to investigate a cult. When the cult leader’s supposed son, rancher Jake Anderson, appears on the scene, they both have a hard time focusing on stopping his mother’s machinations as their attraction burns brighter. \

A family goes missing, throwing Cedar Creek in turmoil. Former ADA Yashi Baker destroyed Detective Ben Little Bear and their relationship with one cross-examination on the witness stand years ago. But the kidnapping draws them together, forcing them to revisit a love lost.

SHIELDED IN THE SHADOWS

Where Secrets are Safe

A probation officer and a prosecutor team up to protect a woman in danger from an unknown abuser. As they work through a treacherous case, love never enters the equation…until their attraction becomes too hard—and lethal—to ignore.

Colleen Thompson: Colleen Thompson began writing the contemporary romantic suspense novels she loves in 2004. Since then, her work has been honored with the Texas Gold Award and nominations for the RITA, Daphne du Maurier, and multiple reviewers'choice honors, along with starred reviews from Romantic Times and Publisher's Weekly. A former teacher living with her family in the Houston area, Colleen can be found on the web at www.colleen-thompson.com.Karen Whiddon started weaving fanciful tales for her younger brothers at the age of eleven. Amidst the Catskill Mountains of New York, then the Rocky Mountains of Colorado, she fueled her imagination with the natural beauty that surrounded her. Karen lives in north Texas, where she shares her life with her very own hero of a husband and five rescued Boxer dogs. She is now a full-time writer! Check out her website, www.karenwhiddon.com.Author of 80+ books, Marilyn Pappano has been married for thirty+ years to the best husband a writer could have. She's written more than 80 books and has won the RITA and many other awards. She blogs at www.the-twisted-sisters.com and can be found at www.marilyn-pappano.com. She and her husband live in Oklahoma with five rough-and-tumble dogs.A USA Today bestselling author of 96 novels in twenty languages, Tara Taylor Quinn has sold more than seven million copies. Known for her intense emotional fiction, Ms. Quinn's novels have recieved critical acclaim in the UK and most recently from Harvard. She is the recipient of the Reader's Choice Award, and has appeared often on local and national TV, including CBS Sunday Morning.