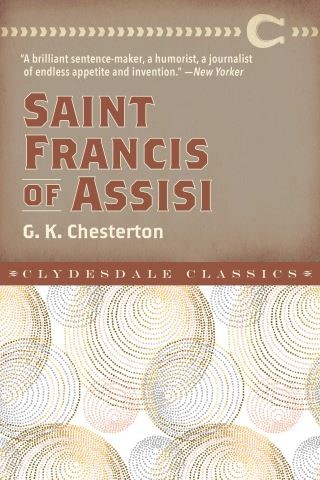 Saint Francis of Assisi is one of the most beloved and well-known saints in the Catholic church. In this biography, G. K. Chesterton relays the unique and inspirational life of the humble saint. Starting life as a wealthy young man full of life and spirit, Francis soon joined the war between Assisi and Perugia and returned, ill and downtrodden. He ended up joining the papal forces and after witnessing a poor man begging for alms his spirit was renewed and he was inspired to start a new life of humble poverty.

Though not yet officially part of the Catholic papacy, Francis soon amassed a following in Assisi and traveled to Rome to get approval from Pope Innocent III to form what is known today as the Franciscan Order. The Order devotes themselves to living in poverty yet giving generously to the needy.

Today, Saint Francis is the patron saint of animals and ecology, having showed his love for all of God’s creation early in his life. This new edition of the biography of Saint Francis will be an inspiration for all readers, secular and religious alike.

G. K. Chesterton: G. K. Chesterton was an author and journalist from the early twentieth century. His works were composed of everything from fiction to prose to social essays. Most of his subjects were on based on three concerns: social criticism, literary criticism, and theology. Some of his more popular works were his Father Brown mystery series, The Man Who Was Thursday (1908), and What’s Wrong with the World (1910).