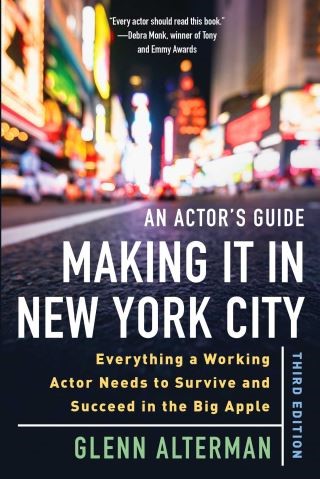 An Actor's Guide—Making It in New York City, Third Edition

A great deal has changed in the industry in the last decade. In this new, third edition of An Actor’s Guide—Making It in New York City, Glenn Alterman provides everything actors need to know. You’ll discover the ten things that it takes to make it as a successful actor in the city, how to support yourself, where and how to start your life as a New York actor, understanding and marketing “your brand,” the best acting schools and conservatories, effective ways  to contact agents and casting directors, and more. The author, a successful working actor, also shares many insider tips on topics such as:

Among the book’s many interviews are legendary show business figures, such as actors Henry Winkler, Alison Fraser, Dylan Baker, Lisa Emery, and Charles Busch, as well as casting directors Juliet Taylor, Ellen Lewis, Jay Binder, Donna DeSeta, and Liz Lewis, among many others. With Alterman’s essential guide, you’ll be prepared to launch and maintain your dream career in the city that never sleeps.

Glenn Alterman: Glenn Alterman is a multi-award-winning playwright, acting coach, actor, and the author of thirty-one theater books. His plays have been produced throughout the United States and on three continents and have won over 45 international awards and received several international arts grants. He was listed as “The Best Monologue/Audition Coach” by the readers of Backstage magazine, and RecordSetter.com lists him as the “Author of the Most Published Monologues for Actors.” Some of his most popular books include The Perfect Audition Monologue, Two Minutes and Under, Creating Your Own Monologue, Writing the 10-Minute Play, The Best Monologues for All Auditions, and 101 Original One-Minute Monologues. He lives in New York City.