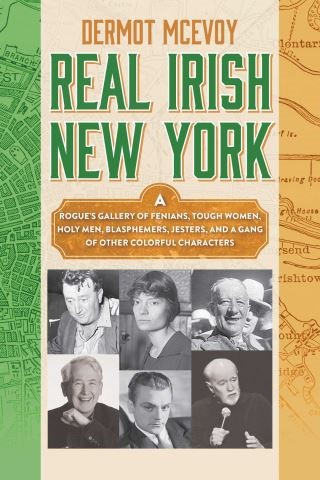 A Rogue's Gallery of Fenians, Tough Women, Holy Men, Blasphemers, Jesters, and a Gang of Other Colorful Characters

As they entered their six hundredth year of British occupation, the Irish looked to America. By the 1840s, America was the oasis that the Irish sought during a decade of both famine and revolution, and New York City was the main destination. The city would never be the same.

Refugees of the famine found leadership in Archbishop “Dagger” John Hughes, who built an Irish-Catholic infrastructure of churches, schools, hospitals, and orphanages that challenged the Protestant power structure of the city. Revolutionaries found a home in NYC, too: Thomas Francis Meagher would later become Lincoln’s favorite Irish war general; John Devoy and Jeremiah O’Donovan Rossa continued their fight from the city after the failed Rising of 1867; two men killed in the Easter Rising, Tom Clarke and James Connolly, spent substantial time in New York.

While the Irish made up much of the NYPD and FDNY, there was also the criminal element of the 1860s. The toughness of the New York underworld caught the eye of Hollywood, and James Cagney would become one of America’s favorite tough-guy movie characters. Irish gangs would be made famous in Martin Scorsese’s Gangs of New York. Today, Eugene O’Neill, Jimmy Breslin, Pete Hamill, and Frank McCourt populate our literary canon.

These Irish influenced every phase of American society, and their colorful stories make up Real Irish New York.

Dermot McEvoy: Dermot McEvoy is the author of five previous books, including The 13th Apostle: A Novel Of Michael Collins And The Irish Uprising. His writing can be found on IrishCentral.com. He lives in Jersey City, NJ.