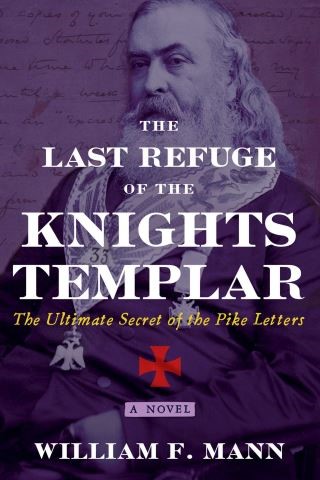 The Last Refuge of the Knights Templar

The Ultimate Secret of the Pike Letters

• Follows the protagonists, Thomas and Janet, as they seek to protect the Pike letters’ secret from the Vatican and its fanatical Jesuit hitman as well as others who desire to use the letters’ secret for world domination

Centered on recently discovered, authenticated correspondence between two famous 19th-century Masonic leaders, Confederate General Albert Pike and British Colonel James Wilson Bury MacLeod Moore, this modern-day thriller follows Thomas, a direct descendant of Col. Moore, and Janet Rose, a direct descendant of the Merovingian Kings and House of David, as they risk their lives to protect the letters and the Templar and Rosicrucian secrets encoded within them. As Thomas and Janet discover, everyone--from the Church to the White House to Confederate sympathizers and the KKK--seeks the ancient knowledge contained within the letters, knowledge that would allow a singular entity to control the world and bring all of the great religions to their knees.

Pitted against a psychotic and sexually perverted Jesuit priest, tasked by the Vatican’s inner circle to retrieve the Pike letters, the couple is aided by two Templar guardians and a modern-day practicing alchemist, Janet’s grandfather. As Thomas and Janet’s love for one another grows, the couple transcends to a higher level of understanding, unaware that they are following the same ancient morals and dogma found within the 33 degrees of Scottish Rite Freemasonry, as defined by none other than Albert Pike himself.

Part fact, part fiction, the novel, with its 33 initiatory chapters, provides a rare glimpse into the inner circles of modern-day Freemasonry, along with revelations of ancient alliances between Native Americans and the Templars. Set in Georgetown, in the heart of Washington, D.C., the story ends with a dramatic unveiling of the ultimate New World secret sought by so many factions: the location of the last Knights Templar refuge in the New World, where the lost treasure of the Templars, including sacred knowledge of the Holy Family--the descendants of Jesus and Mary Magdalene--remains to this day.